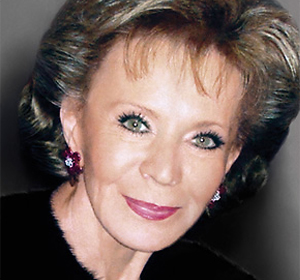 Mrs. Lily Safra shared her commitment to caring for the less fortunate with her husband, Mr. Edmond J. Safra, one of the twentieth century’s most accomplished bankers and founder of the Edmond J. Safra Philanthropic Foundation. She chaired the Foundation for over 20 years, supporting projects related to education, science and medicine, religion, culture, and humanitarian relief in over 40 countries.

Sharing her reflections on her work, Mrs. Safra said: “Edmond and I shared the belief that in the eyes of God we are all entitled equally to dignity, and that everyone has a right to a dignified life. We also believed that those to whom God had given more than they needed also had the duty and great privilege to share their blessings with those who didn’t have enough. We took joy in giving, as when you support people who are making a real difference in the world, you end up receiving far more than you give.”

Like her philanthropy, Mrs. Safra’s life was dynamic and global. She spoke six languages and made her home at different times in seven countries. She was known for her elegance, independence, generosity, and eye for detail.

Lily Safra was born Lily Watkins on 20 December 1934 in Porto Alegre, Brazil. Her parents were Jewish immigrants to South America—Wolf Watkins, an engineer of Czech and British origins who had prospered in Brazil and Uruguay, and Annita Noudelman, whose family fled pogroms in Odessa for the safety of Brazil. Lily’s father manufactured railroad cars, with a factory in the city of Mesquita (near Rio de Janeiro), where the main street was named “Rua Mister Watkins” in his honor.

At age 17, Lily moved from Rio de Janeiro to Montevideo, Uruguay, marrying Mario Cohen. They had three children, and the marriage ended in divorce. Lily returned to Rio, and in 1965 she married Alfredo “Freddy” Monteverde, proprietor of the Ponto Frio appliance store chain. Monteverde passed away in 1969.

Edmond and Lily Safra were married on 14 June 1976 in Geneva. They formed a strong bond and an enduring love. True partners and constant sources of support for each other, Mr. and Mrs. Safra established beautiful homes in Geneva, London, Paris, New York, Monaco, and the French Riviera —the latter, La Léopolda, being a former property of the king of Belgium. With their combined eye for quality, they curated a world-class art collection.

Mrs. Safra was a loving mother, grandmother, and great-grandmother, and she always took great pleasure in welcoming guests generously. Her devotion to her friends inspired the same in return. Sir Elton John famously remarked, “When Lily asks you to do something, you do it.”

Mrs. Safra was her husband’s solace and caregiver when he began suffering the symptoms of Parkinson’s disease. In the years since his passing in December 1999, she became the carrier and guardian of his legacy.

Mrs. Safra initiated many educational projects in memory of her husband, including endowing the Edmond J. Safra Center for Ethics at Harvard University. A long and distinguished relationship with the Hebrew University of Jerusalem led to the naming of the Edmond J. Safra Campus. Mrs. Safra was Honorary Chairman of the Israel Scholarship Education Foundation (ISEF), which she established with her husband in 1977, and which has become the largest non-profit organization promoting higher education for gifted Israelis from disadvantaged backgrounds. Mrs. Safra also funded numerous efforts worldwide helping teachers impart the lessons of the Holocaust and the values of tolerance and courage to their students, remarking: “It is only through education that we can hope to prevent future generations from repeating the tragedies of the past.”

Mrs. Safra regularly said, “It was with Edmond that I learned the joy of giving, as well as that when you support people who are making a real difference in the world, you end up receiving far more than you give.” It was this sentiment that led to a record-breaking sale of jewels from her personal collection that raised nearly $38 million, distributed to 32 charitable organizations. This included a world-record price for a ruby sold at auction, consequently renamed as the ‘Hope Ruby’. At the conclusion of the “Jewels for Hope” sale Mrs. Safra said, “I am overjoyed, knowing that so many people around the world will benefit.”

Mrs. Safra was deeply committed to research in Parkinson’s and other brain diseases, as well as the care of people living with these conditions, working with dozens of hospitals and universities worldwide. In addition to being a long-term supporter of the Michael J. Fox Foundation’s research initiatives, she partnered with that foundation to establish the Edmond J. Safra Fellowships in Movement Disorders program, which will train 72 new movement disorder specialists globally by the year 2028. Mrs. Safra established the Edmond and Lily Safra International Institute for Neuroscience in Natal, Brazil, now one of that country’s most highly regarded brain research centers. With her leadership, the Edmond J. Safra Foundation endowed the Edmond and Lily Safra Center for Brain Sciences at the Hebrew University of Jerusalem and supports many other such efforts globally.

Her awareness of the distress experienced by the families of those battling illnesses led her to construct the Edmond J. Safra Family Lodge for patients and their families at the National Institutes of Health near Washington, DC. As a great-grandmother, children’s welfare was always close to her heart: she and her husband built the Edmond and Lily Safra Children’s Hospital in Tel Hashomer, outside of Tel Aviv, which annually treats thousands of children from across the region.

A passionate art collector, Mrs. Safra was a patron of museums around the world, notably the Courtauld Institute in London and the Israel Museum in Jerusalem, home to the Edmond and Lily Safra Fine Arts Wing. She established the Edmond J. Safra Visiting Professorship at the National Gallery of Art in Washington.

Mrs. Safra also embraced humanitarian causes including building homes for orphaned children in Romania; constructing the Jordan River Valley Camp for children with cancer in Israel; helping to establish the Agahozo-Shalom Youth Village in Rwanda; providing welfare services for the elderly in Odessa; and assisting the Red Cross with its relief efforts after natural disasters around the world. She was a Co-Founder of the Prince Albert II of Monaco Foundation, dedicated to the sustainable and equitable management of natural resources.

Mrs. Safra was awarded honorary doctorates from the Hebrew University of Jerusalem, Tel Aviv University, the University of Haifa, Technion-Israel Institute of Technology, Brandeis University, and Imperial College London, and was an Honorary Fellow of King’s College London and the Courtauld Institute of Art. She was made a Commandeur of France’s Ordre des Arts et des Lettres and Officier de la Légion d’honneur by the President of France and Chevalier de l’Ordre de Léopold II by the King of Belgium. Mrs. Safra was a Trustee of New York’s Museum of Jewish Heritage and served on the boards of the Michael J. Fox Foundation for Parkinson’s Research and the Foundation for the National Institutes of Health.